Center of a Point is Aside

The Center of a Point is Aside

THE CENTRE OF A POINT IS A SIDE
We all live in a world of an entire space-time shift, in an era of displaced concepts, displaced boundaries, combined peoples and territories of substituted historical values. Optical perception of a modern man is out of focus and produces a failure, crushing reality on the set of projections in the mind of the perceiver.
Observing the phenomena of nature, we try to identify with them with the aid of numbers and formulas, combining symbols in theories and laws, and creating norms. Do we understand the world better? Is the matter surrounding us stable and valid?

Tanya Preminger (Israel) forms a loose texture of the soil, revealing the essence of the earth element as a solid.
Laurent Reynès (France) creates a “flow” of macro-dust of multiscale stones suspended over the heads of spectators.
Lucien den Arend (Finland) constructs spatial objects, in which form and emptiness, “internal” and “external” are reversed.
Valeriy Kazas (Russia) deprives the wall surface impermeability and weight, defying the laws of gravity and causing the illusion of free and total soaring “penetration” of objects through walls, ceiling, and floor.
Ekaterina Sisfontes (Sweden) – creates two objects with an optical effect of a “displaced center.”

The purpose of creative experimentation is the author’s desire to pay attention to the diversity of the modern viewers’ semantic and aesthetic angle of visual impressions that we receive from the world, based on conciseness and clarity of structure of natural forms.
E. Shipicina, Curator, Art director of the Ekaterinburg Gallery of Modern Art

The Space at Project Fabrika was 513 m2 and 6 meters high.
Founded in 2004, PROEKT_FABRIKA is the first independent
not-for-profit contemporary visual art organization in Moscow.
The project has more than 700 square meters of exhibition spaces,
international residency, and 1000 square meters of venue space destined
to accommodate diverse cultural and social events such as dance,
theatre, and music concerts. Originally designed to present
a program of collective exhibitions, the project is now committed to promoting cultural
and intellectual diversity through the presentation of international contemporary art and culture.
In 2008 our center became a member of Trans Europe Halls
( European network of independent culture centers).

What we do not see, we do not realize.
The cube model in the fourth dimension, theoretically invented by mathematicians, is a simplified form of our thinking. Of course, the self-rotating cube in constant motion possible in all its manifestations simultaneously in the real world is much more complicated.
Parallel lines are not necessarily parallel to themselves.
Without limiting the world by static positions, I am eager to show its infinite possibilities.
Stand with your legs shoulder-width apart, defocus your eyes, keeping them away from the world, relax and imagine how it invariably changes its foundations.

Size 3x3x1,5 meter
What we do not see, we do not realize.
The cube model in the fourth dimension, theoretically invented by mathematicians, is a simplified form of our thinking. Of course, the self-rotating cube in constant motion possible in all its manifestations simultaneously in the real world is much more complicated.
Parallel lines are not necessarily parallel to themselves.
Without limiting the world by static positions, I am eager to show its infinite possibilities.
Stand with your legs shoulder-width apart, defocus your eyes, keeping them away from the world, relax and imagine how it invariably changes its foundations.

Tatyana Preminger’s creative process deals with distortion of the conventional structures, her works – confirm the connection with the sculptor’s world order, using objects of stone and earthen textures to talk about the philosophical concept of matter and its border states.
Installation “Harakiri” is created from soil – a metaphor for the state of the Earth’s boundary between life and death. The author compares the soil of the Planet with a body of humiliated and tormented living beings, ready to commit purifying suicide, liberating the spirit from the captivity of the defiled body. Tanya Preminger is familiar with the pantheistic worldview, according to which the Earth – a living growing organism with its consciousness.
Sculptures made of stone “The main meal” and “Soup” are completing the semantic field of her project, sneering at the arrogance of human rationality and claiming the existence of interdependence between the world and man.

Valeriy Kazas was born in 1964 in Krasnodar, Russia, where he received his higher technical education.
He has been working in the field of sculpture for more than 25 years, actively exhibiting since 1996. In 2013 he realized his first large-scale project related to large landscape sculpture – “Perm CORAL REEF.”
A regular participant in art residence in Kotor, organized by Marat Guelman in Montenegro. Lives and works in Krasnodar.

Trivial situation – a large blank white space with a small event, a red spot, randomly located on it. There is nothing unusual or new. A simple statement of fact – the operating point is affecting an arbitrarily vast unfilled situation. It’s like a dead (preferably full) mosquito on a sterile wall – regardless of the size of the wall ceases to be sterile. Moreover – it is enough just once to see this spot, and it captures all of your attention, always reminding you about itself. Roughly the same thing with a sculpture in the urban environment – even if it is not visible, it is always there. In this case, the conversation is not about the actual matter of a subject it is about its interaction with a vast and vacant space. As for the red spots – they are static, arbitrarily made pieces of elementary structures, carried out without any compositional and other balances being placed on the walls outside of any representation. Spontaneity and nothing more. Besides, neither form nor location matters. What is important is only the scale, for it is space that is the value of the rhythm.

Born 1961 in Montpellier.Sculpture. Doctor of Fine Arts, DPLG Architect, Professor of the Strasbourg School of Architecture since 1994

We are all on the same stone hanging in space, and there are billions, we don’t know why. Depending on its environment and its context, the same object could be by turns heavy or light. The stones travel through space and time. Erosion is one of their ways of shifting; it modifies their physical features and pushes them further on, toward the sea and the dust. Their forms indicate how they have been taken. Their forms are telling us that we are on a similar but larger stone that is turning into space of the universe. In all of us flow several rivers. Maybe everyone is a network of rivers. Our rivers of ideas and desires will flow incessantly and run endlessly toward one another. The fluids existing between stones are links, mediums, and cement which finally shape it all, a compact mass that connects itself to the movement and erosion made by time and life. Taken from the mantle, the stone is rolling slowly as the fluid of life is rolling itself. The stones are a reminder of the perfection of which our form of life is made. The form and the history of a stone contain our planet and even more.

He was born in 1943 in Dordrecht, Netherlands – Dutch-Finnish artist, known for his work in the field of geometrical abstract sculpture and land art.
From 1953 to the 60s he lived in the United States, studying art at California State University. Then, after returning to the Netherlands, he continued his studies at Tilburg and Rotterdam art academies; teaching in Amsterdam and The Hague. In the early seventies, he met with Henry Moore. From 1984 to 1986 he was chairman of the Association of Dutch sculptors; he organized several international exhibitions and a sculpture symposium.
He currently lives and works in Finland, where he runs an open space and a permanent exhibition of his sculptures, POAM (Penttilä Open Air Museum, «Open Air Museum in Penttilä”).

The basis of my work is manifesting the way a sculpture has been devised – this is contrary to reaching a final form at all costs. In my work, form follows the most economical way a concept can be realized; you could say form follows construction. A direct and elemental form results from the techniques and tools being used (see also “the means is the message,” which I wrote for the exhibition “Konkret Acht” in Nürnberg, Germany in 1988). This still holds true today.
In “Moscow perpendicular division” I divide a cylindrical mass – (here is the name for this wood in Russian) in a direct and geometrical way, resulting in repeated multiple identical forms which together compose the primary segments of the tree. 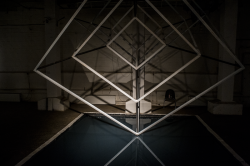 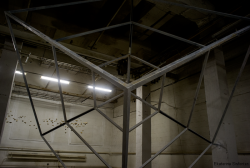 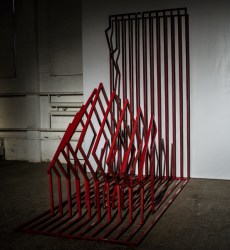 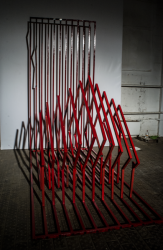 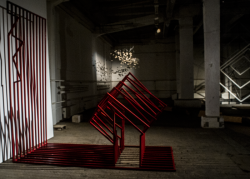 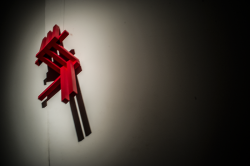 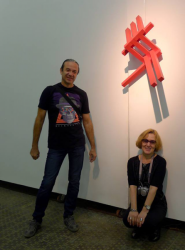 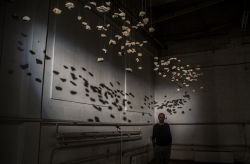 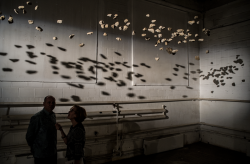 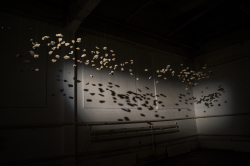 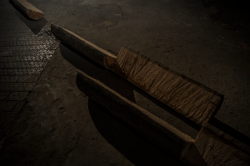 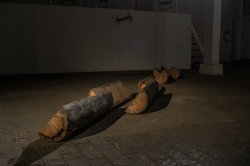 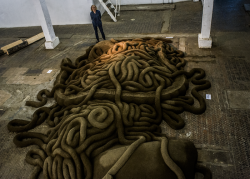 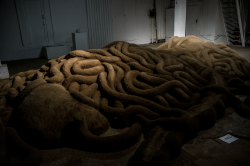 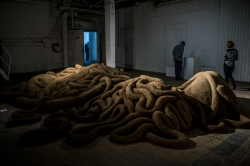 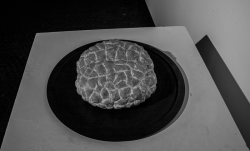 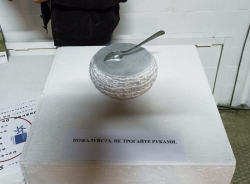 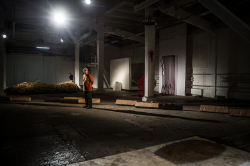 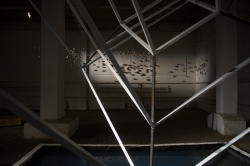 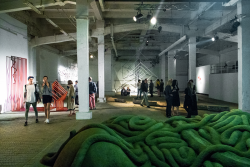 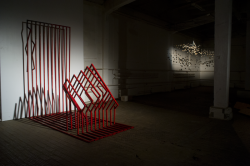 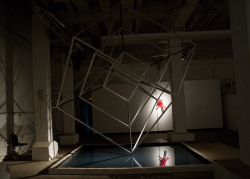