Like children playing on the playground in King Mountain, endless hordes of soldiers follow the self-deluded omnipotent.
Their desire to possess the space is a battle for power, and only in retrospect will it be possible to heartily
ridicule the fragility of such vain ambitions to conquer the world alone.

The installation was presented at the Napoleon–12 festival of contemporary art in St. Petersburg, Russia, in 2012.
The festival’s curator Artem Magalashvili asked the artists to describe their feelings towards the French emperor Napoleon,
who in 1812 attempted to conquer the world and was stopped by the Russian army.

My response was laughter.
This installation later appeared as part of a special project of the Russian Biennale “Uchronia”
in the Moscow Museum of Architecture, in December 2013. Shortly after this,
it was part of the art festival “Forma” at Art Play, Moscow. 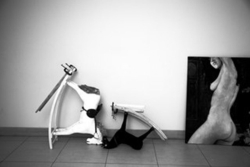 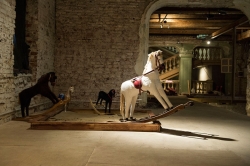 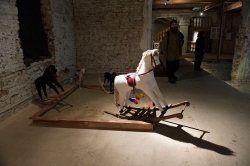 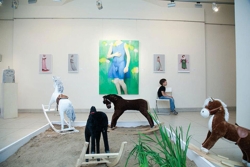 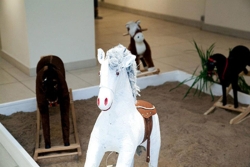 UCHRONIA was conceived as a study of history, consisting of discussions and exhibitions
with the participation of authors from older and younger generations; philosophers, critics, and cultural experts.
All reflected on the alternatives of the past, present, and future, offering visions, and analyzing existing approaches,
imagery, and aesthetic forms.
One of the important themes of the project is the phenomenon of re-writing history and its role in the perception of reality.