#UKRIANA30 – Exhibition for 30 years of independency of Ukraine

On August 24, independent Ukraine turns 30 years old and deep into the centuries goes cultural roots.
This blue-yellow Cossack country has been related to Sweden since the Viking Age and has hosted song and struggle for 1000 years.
The land of Ukraine, as rich as its culture, was being devoured by all the nearby empires such as Russia, Turkey, Austria, Poland and others. during long epochs.

The struggle for independence was never given up. National culture developed despite the fact that several Ukrainian talents contributed to the cultures of empires instead of their own, but still we have wonderful Ukrainian literature that shines through the centuries.

In 1991, after the dissolution of the Soviet Union, the country finally became independent, the country’s struggle for existence continues and here is Ukraine’s national poet of the last three centuries in Swedish translation.

Four poets, the Baroque philosopher Hryhory Skovoroda (1722 – 1794) can be taken as Ukraine’s answer to C M Bellman and as much as Ukraine’s answer to Omar Khayyam, the scientist, revolutionary and freedom fighter Ivan Franko (1856 – 1916), the Soviet prisoner of conscience who died in a camp but did not give up the dream of independent Ukraine Vasyl Stus (1938 – 1985),
living and published in Sweden today Serhiy Zhadan (born 1974) illuminates the country and man through epochs.

Translated into Swedish by Eugene Wolynsky under the editorship of Mattias Ågren. 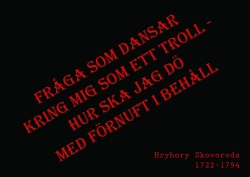 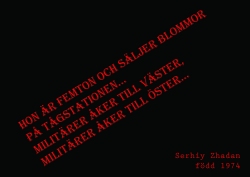 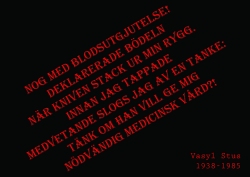 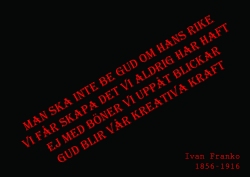